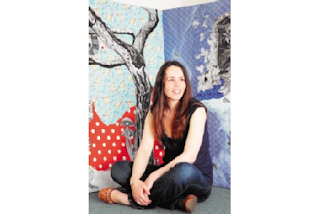 Bridlington artist Leanne Broadbent. Picture: Simon Kench
http://www.thisishullandeastriding.co.uk/Bridlington-artist-friend-display-surreal/story-12759440-detail/story.html
Together with her friend and fellow artist Rhea Sherriff-Hammond, who lives near Whitby, Leanne has spent two years creating a series of mixed-media canvases for the exhibition.
"It just occurred naturally," Leanne said. "We were meeting in Scarborough – which is the central point between our homes – and I mentioned I was interested in doing something about Alice's Adventures In Wonderland.
"Rhea said she had been looking to paint something inspired by the character of the White Rabbit.
"It was strange how we had both arrived at the same point – I think we're of a similar mind with our work."
The exhibition, at Sewerby Hall, has been planned since 2009. While Leanne and Rhea have been friends since 2002 – they met as art students at the Scarborough campus of the University Of Hull – this is their first joint showing.
"We instantly became friends," Leanne said. "We had an interest in similar artists and got on like a house on fire. It's surprising that this is the first exhibition we'll have done together."
Their shared interests include the work of Sigmar Polke – an experimental German artist whose mixed media works included the use of fabrics.
Among the 37 pieces being shown is Leanne's work Alice – which uses pieces of fabric to create a layered, and unsettling, take on Lewis Carroll's story.
"For me, it is great to get contemporary artwork into a venue such as Sewerby," said Leanne. "Most galleries are commercial – they do not want to take as many risks – but with Sewerby being a council property, they are willing to take that chance."
Posted by Rhea Sherriff-Hammond at 09:29